The trails: they're seen in both the Story mode and Multiplayer. They're not so intense in Story mode. They would appear on a car you're chasing (red), or behind your car if you shift out of it (blue). In multiplayer they're horrible however. Red is for enemies, blue for allies, and yellow for the Trailblazer car. Ok the trailblazer ones obviously need to be there. I also read that there's pink ones but don't know in which mode that is.

The shields: they very rarely appear in Story mode, I think mainly in missions / challenges where Jericho throws cars at you. I don't think they ever appear in blue in Story mode. But in multiplayer, everyone has them sadly. Again, red for enemies, blue for allies, yellow for the Trailblazer car, and pink again I don't know, I guess it's unused, or maybe for some split screen modes.


Let me show you some pics.

It's the car that is chased that always has the trails. Here a Capture The Flag match, and you can see that I have not only blue trails, but also a blue shield, which isn't as noticeable on a blue car, except that it has this ugly plastic look:

And now take a look at those pics without shields. See how much better it looks! I have this bug sometimes when they don't appear. The first pic has another bug, because the names appear in red instead of blue (cops are allies in this case, so they should be blue).


Alright, the thing is, I want to get rid of that. I want to make this a project and everyone who wants to join can join! Seriously, we need to do everything to get rid of this. To get rid of the trails (well, except on the trailblazer car) and especially of the shields. I have no idea how to find this or what could be done here.

But I've researched a bit in the game files, and I found some stuff that is related to this I think. It says Blue 32, Blue 128, Red 32, Red 128, Yellow 32, Yellow 128, Pink 32, Pink 128. I think for one of them there's only 32 or 128. I don't know what this means, it's probably for the pink one. Oh and, I remember seeing the pink one now. I don't remember the pink trails or the pink shield, but I remember the name box above the car in pink. Someone was playing with a girly name and I thought it's maybe for female players. But now I know lots of girls who play it and they all have the blue shield / box / trails. So it was most likely a bug, a bit like when you get the Trailblazer colours.

Over 2 years ago, on Driver-Dimension, people were already complaining about it, and so was I. (they're seen in the E3 demo)
I think we had even done a letter with questions to Reflections, or a letter with wishes I think, as the admin of the site was going to visit Reflections, and I think we asked for an option to remove / disable this, but I don't see an option for that. So it was left. A shame, because in another early but not-so-early gameplay video of Takedown, you can see that no police car has the red shield. You can also see that there's no red walls in this version of Takedown, and the player goes really far away. What a shame! Now I also want a feature to turn off red walls. (we'll do that later…)

So, who's in? The game looks so much more beautiful without it. It ruins it all if you ask me. Let's do this!!!

It looks so much more realistic! Also at ~ minute 3 I believe, and later around minute 5 you see Takedown with the Firebird, but he's in a place that can't be reached in the normal Takedown, because of the red walls.

Also, the dude explains that this video was filmed with the film director mode of the game, hence why there's no HUD. So there was film director for online!

This was my dream, seriously.

I saw another video a while ago where Martin Edmondson was showing the game, and he was in the main menu of the game. In small writing it said "Dev Menu", probably some kind of debug menu. I wonder if this is still there and if it can be activated somehow. The menu it self looked exactly the same, but it probably has more features if you go deeper into it. I should investigate on this

I also found a list of game modes not so long ago, one of them isn't being used. (not that it would be related to this, but just to avoid creating a new thread just for this)

I'm not sure but I think I also remember a qualify that I didn't see in the game. I'm wondering if this was left out or if it was meant for DLC. But I doubt it was meant to be DLC because they said all content that was meant to be DLC already came with the final game. Then on the other hand, there can always be updates. Which would basically be this… because it's nothing you download, it's already present but "unlocked" as you can see. And updates, we've already seen them. I remember when the Dodge Charger cop car was unlocked in takedown, along with some new takedown vehicles. I'm wondering if they would have continued and would have made some other vehicles available for these modes. It seems like they had to stop because of Watch Dogs.

I really hope to find something about the trollies in there. I hope they're present, but just turned off. But so far no sign!

And formatted, what do you mean? It's in Lua, it looks like this:

It's not an abbreviation, it's the name of the program and means "moon" in portuguese!

+3 more
-  Wed Feb 13, 2013 1:07 pm #47571
I know what Lua is, I was just curious to see how DSF uses it. I would imagine having access to uncompiled scripts would help any future efforts to decrypt/decode the Lua in the PC version

Need help with something? PM Me!
Formerly known as CarLuver69 / Dr. Doom

Might take a look at trails at some point.

By MateuszCOMPANY -  Tue Dec 08, 2020 11:01 pm
-  Tue Dec 08, 2020 11:01 pm #65691
World Multiplayer is dead but people still playing it with friends. In small groups installing mods is not a problem.
Moreover Driver SF is added to queue list in nucleuscoop project where multiplayer games is converting to party games. Its matter of time when DSF become local four splitscreen game.
Trails is ok, its useful in trailblazer mode. I meant deletion car shields (blue and red) which hide car textures and killing game realism. Identification with nickname above the car is absolutely sufficient. 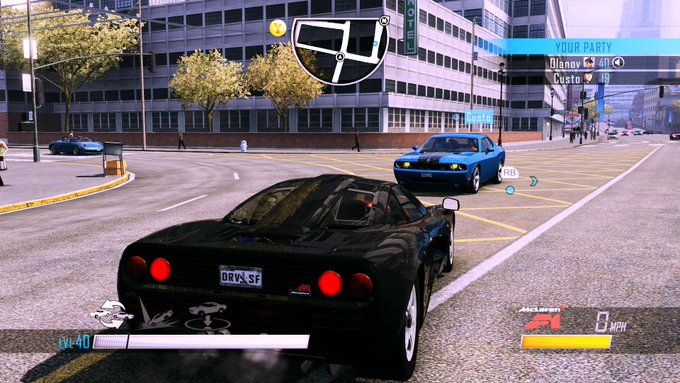 Proof that I'm not talking out of my ass at least.

If its wouldnt be problem you can also kick RB pointer jumping on the screen in party mode.

If its wouldnt be problem you can also kick RB pointer jumping on the screen in party mode.

I can't really do anything about the bus prompt for now as I don't wanna accidentally break something removing it, and I don't have the time to test it proper.

Hey! Glad to see that you like it! Improvements wi[…]

Hi i had the same problem with Parallel Lines on W[…]

Hi I think they gave the name Parallel Lines becau[…]